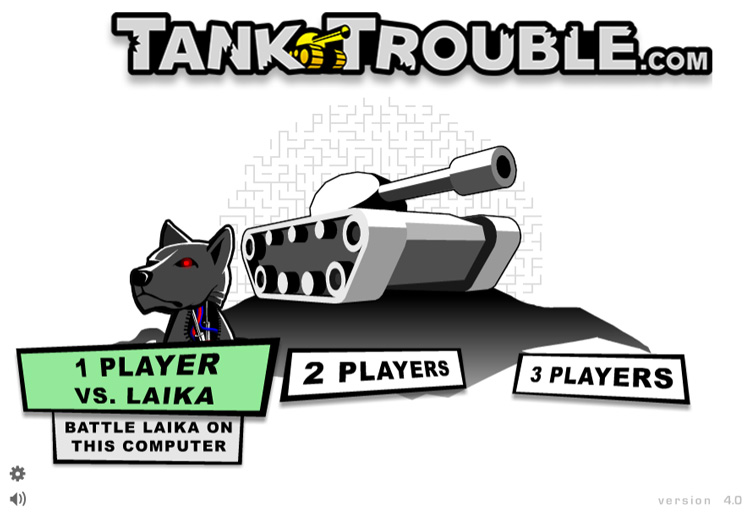 Tank Trouble is an online Flash game that puts you and your tank in a tiny maze. Your mission is to destroy the opposing tank, which is rumbling around in another corner of said maze. The catch here is that you only have five bullets, and they’re all going to ricochet around the maze until they hit something. That something could be you, so watch out!

It’s hard to imagine going to war with only five bullets, but it’s all you’ve got to work with. The geniuses behind this challenging online game have given you the tools you need to defeat your enemies; now, it’s your turn to finish the job.

Much of the game’s charm comes from its simplicity. Your only job is to kill the other tank. That’s it. There’s no hefty plot or overbearing game mechanics; you must blow the other tank up before it blows you up. The graphics are equally humble and two-dimensional, so you won’t have to deal with any lag despite the fact that the game has over 1 million registered users as of this year.

Gamers start off by choosing how many players they want for their game. The single-player version pits you against the robot dog Laika, but there are also two-player and three-player versions. Do you want to know the other catch? The multiplayer is strictly on your computer. That means that you and one or two other friends will have to share the same space as you battle to the death. This ripens the situation for moments of hilarity and utter confusion as your fingers struggle to maintain your hold on the keyboard.

The trick is ricocheting bullets off of the maze’s walls and hitting another tank. Facing your opponent straight on is most likely a suicidal mission, so you’ll have to use the game’s physics to bank a shot and hit your target. Some of the levels have lots of corners that are “safe” as long as other tanks don’t get too close, and these can be especially difficult to beat when you’re not the one holding down your corner fort.

Blowing up tanks is about as fun as it gets, and the seamless gameplay and easy-to-learn mechanics make for a fun, interactive experience. It gets better when you throw other players into the mix. Playing against your AI opponent can get lonely after awhile, so invite a couple friends over and let the mayhem begin! Bonus powerups are available for your tank, but don’t depend on them for victory. It takes one lucky shot from your enemy, and BOOM! Your tank is gone. The game is still free to play, so you and your buddies can enjoy hours of carnage with no cost to you.